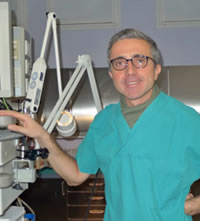 Why do we need contrast agents in EUS?
Although EUS has a very good accuracy for the study of inner organs compared to transabdominal ultrasound, it has certain limitations that would make tissue enhancement desirable.

Among these, it should be quoted that EUS is highly operator dependent, tissue confirmation with fine needle aspiration is usually required for differential diagnosis of tumors, and some pre-existing conditions (such as biliary stents, chronic pancreatitis) may hamper the detection of small lesions.
The use of intravenous ultrasound contrast agents (UCAs) has become standard of practice in transabdominal ultrasound for the diagnosis and follow-up of hepatic and pancreatic diseases.
However, there is a limited experience with the use of UCAs in endoscopic ultrasound (EUS). Nevertheless, the potential goals of contrast enhanced (CE) EUS are multiple including:
• characterize tumor vascularity in the pancreas;
• diagnosis of nature of lymph nodes;
• staging of gastrointestinal tumors;
• study of portal hypertension.

Mechanism of action
The first idea of utilizing UCAs to improve ultrasound images dates back more than 40 years ago. However, several challenges have been encountered to produce microbubbles small enough to cross the lung bed and to prolong their survival.
The solution is twofold. First, the gases are encapsulated in a resistant shell that can enhance the pressure that a small bubble can tolerate. Second, heavy gases are used, such as perfluorocarbons, which are less water soluble and less likely to leak out ( ).
While gases are compressible, tissue is almost incompressible. When a gas microbubble is hit by an ultrasound wave it vibrates producing a strong backscattered acoustic signal that can be detected and reproduced.
UCAs that are stable on passage through the lungs have been commercially available since 1995. The most studied among the first-generation UCAs, which were filled with air, is Levovist (Schering AG, Berlin, Germany). Second-generation UCAs, containing inert gases with low solubility in water, have been commercially available since 2001. The most studied among the second generation UCAs, which have increased the stability and duration of the contrast, is Sonovue (Bracco, Amsterdam The Netherlands).

Contrast enhanced EUS in the literature
The majority of the publications in the literature dealt with the use of contrast agents with color and power Doppler signals (CE EUS) and not with a dedicated contrast harmonic echo (CHE EUS). The use of contrast agents without a dedicated harmonic is considered of limited value mainly because of artifacts in the color and power Doppler imaging known as ballooning effect.
In 2 studies dating back more than 10 years ago, enhancement of B-mode images was analyzed after injection of Albunex showing for the first time that pancreatic-ductal adenocarcinoma was hypoenhancing in CE EUS ( - ).
Subsequently, a larger experience was described using Levovist as UCA.
Dietrich et al. ( ) used CE (color Doppler) EUS to investigate patients with an undetermined pancreatic tumor. Ductal adenocarcinoma of the pancreas showed a hypovascularity in 57/62 cases while all other pancreatic lesions revealed an isovascular or hypervascular (20 neuroendocrine tumors, 10 serous microcystic adenomas, and 1 teratoma). In their experience, hypovascularity as a sign of malignancy in CE EUS obtained 92% sensitivity and 100% specificity.
A comparison study among CE EUS with Levovist vs. conventional power Doppler EUS vs. multidetector CT for the differential diagnosis of small pancreatic tumors was performed by Sakamoto et al. ( ). The sensitivity of the different techniques for differentiating ductal carcinomas from other tumors (≤2 cm) was 83% for CE EUS, 50% for multidetector CT, and as low as 11% for power Doppler EUS.
Regarding the usefulness of CE EUS with Sonovue to differentiate inflammation (focal pancreatitis) from pancreatic carcinoma, Hocke et al. ( ) reported interesting results. They found that the sensitivity of EUS in the discrimination between benign and malignant pancreatic lesions was increased from 73% to 91% by the use of Sonovue.
Kitano et al. ( ) were the first to report a large experience with a dedicated CHE for EUS. They used a prototype echoendoscope with a broadband transducer and determined the appropriate conditions for observing pancreatic microcirculation by CHE EUS with Sonovue. They found that utilizing a mechanical index up to 0.4 it was possible to visualize the parenchymal perfusion and the microvasculature in the pancreas. In contrast, CE EUS did not depict the parenchymal perfusion and branching vessels, whereas blooming artifacts of large vessels were observed. Mixed clinical conditions were studied including pancreatobiliary carcinomas, gastrointestinal stromal tumors, and lymph-node metastases.

Accuracy of CHE EUS for the study of pancreatic solid tumors
Up to now, we have studied prospectively more than 100 patients affected from solid pancreatic tumors by CHE EUS.
We have reported that CHE EUS increases the accuracy for the diagnosis of solid pancreatic tumors ( ). In brief, a radial commercially available echoendoscope (GFUE160, Olympus Japan) or a linear prototype echoendoscope (XGF-UCT180, Olympus Japan) were used in conjunction with Aloka alfa 10 unit (Aloka, Japan). The contrast agent Sonovue (Sulfur hexafluoride MBs; Bracco International BV, Netherlands) was used in every case.
The protocol consisted in EUS visualization of the pancreatic area of interest, injection of a bolus of 2.5 ml Sonovue followed by a 5 ml bolus of saline. Then, evaluation and recording of Sonovue uptake/washout for at least 3 minutes was conducted. The optimal mechanical index was 0.36. The results were compared to surgical pathology or EUS-FNA.
The finding of a hypoenhancing mass with inhomogeneous pattern was a sensitive and accurate identifier of patients with adenocarcinoma (96% and 82%, respectively); the vast majority of the patients with primary pancreatic adenocarcinoma had a hypoenhancing mass that was inhomogeneous and had fast washout (figure). This finding was more accurate in diagnosis than the finding of a hypoechoic lesion using standard EUS. Hyperenhancement specifically excluded adenocarcinoma (98%), although sensitivity was low (39%). Of neuroendocrine tumors, 11/13 were nonhypo-enhancing (9 hyperenhancing, 2 isoenhancing). Interestingly, CHE-EUS allowed detection of small lesions in 7 patients who had uncertain standard EUS findings because of biliary stents or chronic pancreatitis. Targeted EUS-FNA was performed on these lesions.

Conclusions CHE EUS is feasible and safe. It is able to depict the small vessels by Sonovue enhancement without the common artifacts encountered with contrast-enhanced color- and power-Doppler EUS. Its utilization is very simple and can be used without any additional workload for the endoscopic personnel. As far as pancreatic solid tumors are concerned, the finding of a hypoenhanced lesion with inhomogeneous uptake is a sensitive and accurate predictor of pancreatic adenocarcinoma. Moreover, CHE EUS allows overcoming artifacts induced by biliary stents and chronic pancreatitis and performing targeted EUS-FNA, to improve the diagnosis of pancreatic adenocarcinoma.