Molecular analysis in differential diagnosis of pancreatic cysts: does it help? 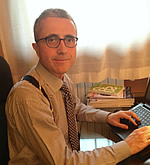 Differential diagnosis of pancreatic cysts by EUS-FNA is often a clinical challenge. Sensitivity of cytology examination of FNA smears does not exceed 50% on average. Analysis of biomarkers such as CEA in the cystic fluid can help to increase diagnostic accuracy but again its sensitivity is far from perfect as it does not exceed 60% according to published meta-analysis on the subject (Thornton G.D. et al. Pancreatology 2013).

Based on previous studies which suggested that molecular markers (such as K-ras mutations and loss of heterozygosity) may have diagnostic utility for the identification of pancreatic malignant mucinous cysts, Al Haddad et al. investigated the potential role of DNA analysis in differential diagnosis of suspected mucinous pancreatic cysts (MPCs). The aims of the study were: (a) to prospectively quantify the performance characteristics of molecular analysis of cyst fluid from suspected MPCs and (b) to compare the accuracy of cyst fluid molecular analysis with cytology and CEA.

Patients undergoing EUS-FNA for pancreatic cysts were enrolled prospectively. The diagnostic reference standard was histopathology from surgically resected lesions. The molecular diagnosis was based on the PathFinder TG report (diagnostic for a mucinous cyst if DNA quantity ≥ 40 ng/mL and/or K-ras point mutation and/or 2 or more allelic imbalance mutations; diagnostic for malignant MPCs if high-amplitude K-ras mutation followed by allelic loss was present).

However, the combination of the two (molecular analysis and cytology + CEA) provided better results in terms of sensitivity and accuracy compared with each criterion (not statistically significant).

Al Haddad et al. concluded that molecular analysis aids in the diagnosis of MPCs when cytology is nondiagnostic or CEA is indeterminate or not measurable. However, based on their results, they do not recommend the routine use of molecular analysis, which should be used selectively after review of imaging findings and cyst fluid studies.